SOUTHERN PUERTO RICO EDD
Why are there 6 Municipalities
in Puerto Rico’s Pilot EDD?
Economic Development Districts represent multiple municipalities (or counties) to coordinate planning and investments that build upon existing regional strengths and infrastructure to cultivate local competitive advantages and long-term economic development. An organization that requests federal designation to be an EDD must be able to serve and represent the entire geographic area of the region and the region must include at least one geographical area within the designated service boundaries that meets the Economic Development Administration’s (EDA’s) regional distress criteria as set out in 13 C.F.R. § 301.3(a) (see below).

After gathering information to assess which municipalities met the distress criteria, researchers looked for the places where regional economic development opportunities exist. Following are examples of the data used to determine that the six municipalities of Guánica, Yauco, Guayanilla, Peñuelas, Ponce, and Juana Díaz could form Southern Puerto Rico’s Pilot EDD. 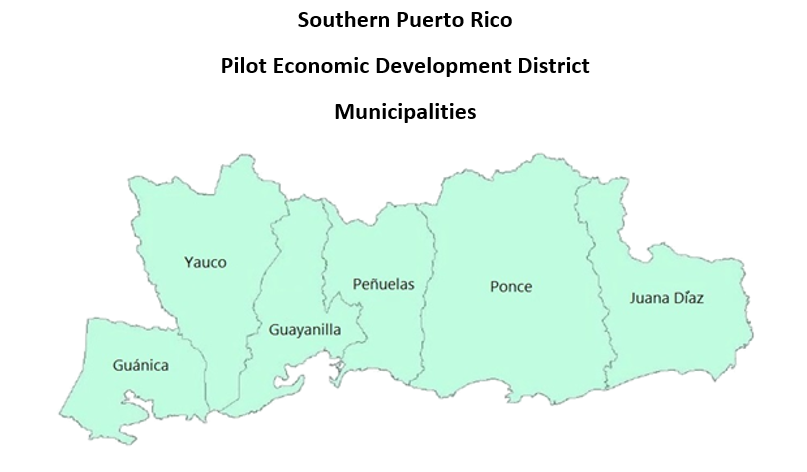 For a Project to be eligible for Investment Assistance under parts 305 or 307 of this chapter, the Project must be located in a Region that, on the date EDA receives an application for Investment Assistance, is subject to one or more of the following economic distress criteria:
Per Capita Incomes from 16 of Puerto Rico’s Southern Municipalities
Another requirement under 13 CFR § 301.3(a) is that per capita income (PCI) for the most recent period must be less than 80% of the national average PCI. According to the US Census American Community Survey of 2017, the PCI for the US was $31,177. Puerto Rico’s 2017 average PCI was $12,081, higher than all of the individual PCIs in the sixteen southern municipalities under review.
Per Capita Income per Municipalities 2017 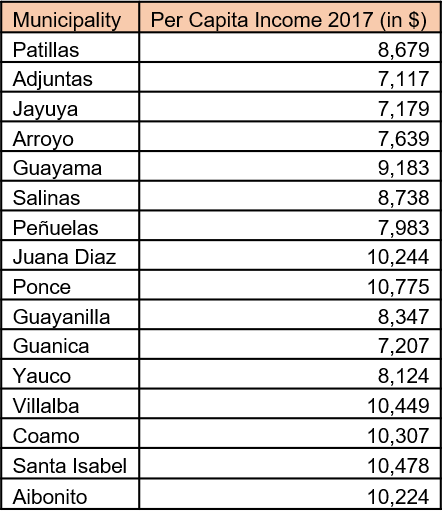 Source: US Census, American Community Survey 2017.
Another consideration is that the Puerto Rico Planning Board has divided the Island into functional regions (see figure below). The Ponce functional region covers eleven municipalities, including all the municipalities selected for the Pilot EDD. This provides another planning organization that overlaps and has some level of jurisdiction in the geographic boundaries of the Pilot EDD for large scale projects.

In the eastern corner of the southern region (Guayama, Patillas and Arroyo) there is no consortium or any kind of planning arrangement and Patillas and Arroyo are still working with their territorial management plan.
Puerto Rico Planning Board Functional Regions

Critical Infrastructure is Necessary for Economic Development
There are many types of infrastructure that are critical for economic development, but because Puerto Rico is an island, and its commercial trade with the rest of the world moves through its airports and ports, those infrastructure facilities were considered critical for this paper. The southern region has 5 five commercial ports and one international airport (see figure below) that are all underutilized. Of the 5 ports, the 3 located in the selected Pilot EDD geographic area are: Port of Ponce, Port of Guayanilla and Port of Guánica (another reason to add this municipality to the Pilot EDD). Also, in the past, these ports were considered to be part of the Port of the Americas Transshipment project. The two other ports are located in Salinas and Guayama and have limited potential for development due to natural resources, such as Aguirre State Park, and specialized operations, such as the Aguirre power plant in Salinas, and the AES power plant in Guayama. There are also some pharmaceutical industries present. Due to the closeness of the ports from Ponce to Guánica, it makes sense to select these boundaries for the Pilot EDD.

Another reason to define the Pilot EDD by the geographic area of these 6 municipalities is that the only commercial airport in the region is located in the municipality of Ponce. This airport has commercial daily flights by JetBlue to Orlando and New York and a runway length of 8,000 feet, making it capable of handling any small to medium size aircraft.
Ports and Airports in the Southern Region

Forming An EDD To Serve Multiple Municipalities In Puerto Rico
13 CFR, Part 304- Economic Development Districts- establishes the criteria to designate a determined geographical area as an Economic Development District. It is herein stipulated that local laws shall be complied with as part of the due process.
Advancing the Goals of Hurricane Maria Disaster Recovery Plans
Achieving an Economic Development District designation is not specifically called for in the Island’s congressionally approved plan, Transformation and Innovation in the Wake of Devastation: An Economic and Disaster Recovery Plan for Puerto Rico. An EDD would, however, advance the same goals as two of the Plan’s Courses of Action and build the formal mechanism to sustain these efforts into the long-term.
Puerto Rico Recovery Plan Courses of Action
​Economics 8 - Define and Develop Economic Development Zones
Define geographically distinct economic development zones (starting with the Port of Ponce) and establish policies (which might include a waiver of the Jones Act) to provide benefits, such as tax advantages.